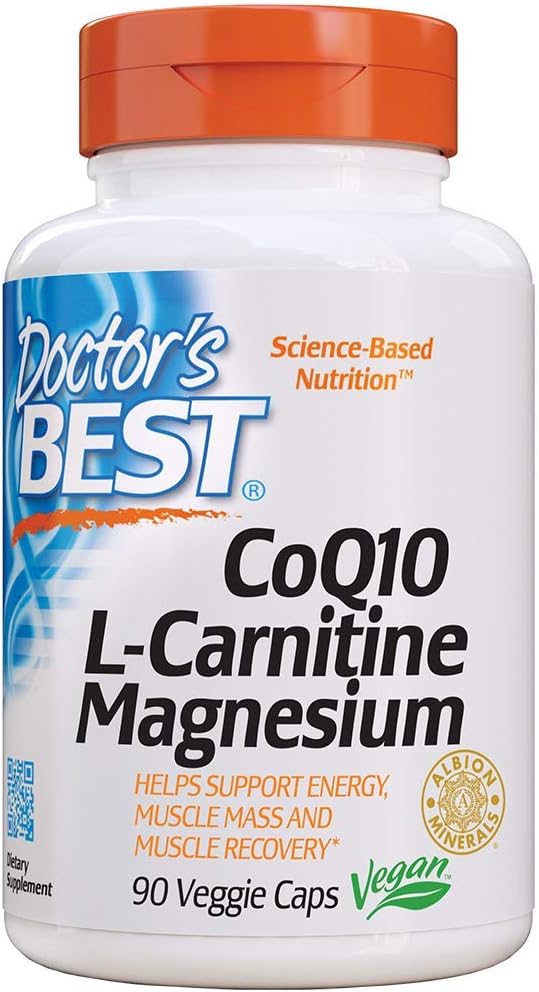 Doctor's Best combination of CoQ10, L-Carnitine, and buffered Chelated Magnesium is a unique blend of nutrients that supports energy, muscle mass and muscle recovery. This convenient combination is designed to help support your high intensity workouts and optimize physical performance.

*These statements have not been evaluated by the Food and Drug Administration. This product is not intended to diagnose, treat, cure or prevent any disease.

Doctorâs Best combination of CoQ10, L-Carnitine, and Magnesium is a unique blend of nutrients that supports energy, muscle mass and muscle recovery.*

This synergistic combination is designed to help support your high intensity workouts and optimize physical performance.*

Coenzyme Q10 is a vitamin-like nutrient that is vital for cellular energy production. CoQ10 is used in the electron transport chain of mitochondria, the power generators of cells. This activity leads to the production of ATP, the major form of cellular energy which is necessary for many functions including muscular activity. CoQ10 also plays a role in health as a versatile antioxidant, stabilizing cell membranes (helping to protect them from free radical damage) and contributing to their fluidity.

Magnesium is an essential dietary mineral that is involved in many vital functions. Magnesium helps the body regulate proper fluid balance as an electrolyte. It also plays a vital role in the production of ATP, as well production of energy through glycolysis. One third of the bodyâs magnesium content is located in skeletal muscle, there it can quickly be utilized to aid in muscle contractions.

L-Carnitine is an amino acid that may be synthesized in the body, using the amino acids lysine and methionine as precursors. L-Carnitine helps shuttle fatty acids into the mitochondria of cells to produce energy. L-Carnitine is largely stored (98% of the bodyâs total content) in skeletal muscle to quickly aid in the production of energy. Carnitine is found in the mitochondria, as it plays a rate-limiting role in Beta oxidation. Fumarate in this form of L-Carnitine also serves as an intermediate in the Krebs cycle, a key cellular energy-producing process.

Together CoQ10 and L-Carnitine are key nutrients necessary to produce cellular energy maintaining an adequate nutritional support level for the cardiovascular system. Coq10 and L-Carnitine play roles in mitochondrial function but together they have a synergistic function in both mitochondrial energy production and antioxidant protection from peroxidation of oxygen reactive species created during the energy production.

CoQ10 Helps Support Energy - CoQ10 can preserve energy turnover in our mitochondria by keeping ATP synthesis at optimal levels. Skeletal and heart muscles use up large amounts of ATP during activity. The energy required for a muscle contraction is released when one of ATPâs phosphate bonds is broken, in a reaction that produces ADP. Phosphate is added back to ADP, re-forming ATP. CoQ10 supplementation acts to aid in this process by preserving energy turnover in mitochondria, keeping ATP synthesis at optimal levels.

Maintenance of normal energy utilization and supply is crucial for maintaining the cellâs ideal biochemical state. CoQ10 deficiency may impair mitochondrial energy production and increase production of reactive oxygen species because of its key roles as an electron carrier in mitochondrial bioenergetics and as a lipophilic antioxidant. Studies have suggested CoQ10 supplementation may aid energy turnover (considered an influencing factor of physical performance).

CoQ10 Helps Reduce Muscular Fatigue* - CoQ10 has also demonstrated an ability to increase PGC-1Î± levels. An increase PGC-1Î± activity has been shown to reduce muscular fatigue and increase mitochondrial energy output by stimulating mitochondrial biogenesis and may even influence muscle fiber composition (towards oxidative mitochondrial-dense type I muscle fiber).19,20 PGC-1Î± levels decrease with age, this is believed to result in a loss of muscular efficiency. This suggests CoQ10 supplementation may combat this degradation of muscular function.

Magnesium Helps Provide Energy and Prevent Loss of Muscle Mass* - Magnesium is required for all reactions involving ATP. ATP also powers the cellular calcium pump, which allows muscle cells to relax. Because it participates in these ATP-controlled processes, magnesium is vitally important for muscle contraction and relaxation. By controlling the flow of sodium, potassium and calcium in and out of cells, magnesium regulates the function of nerves, as well as muscles.

"p" *These statements have not been evaluated by the Food and Drug Administration. This product is not intended to diagnose, treat, cure or prevent any disease.

Search our extensive Knowledge Base for answers to your technical questions on our products.

View video how-tos, overviews, and demos about BMC solutions on our YouTube channel.

Check if your products are supported on specific platforms and databases.

Submit an issue and track the progress of your existing issues and defects.

Everything you need on one page.

BMC has consolidated all Service Management products on a single application environment that combines capabilities of AR System and _inclusionsLibrary. This allows you to simplify your deployment architecture significantly and considerably reduce operati...

Review the _inclusionsLibrary enhancements for features that will benefit your organization and to understand changes that might impact your users. Release notes and notices Known and corrected issues Associate articles with tickets or incidents. Knowledg...

Review the BMC Helix Continuous Optimization 2021 enhancements for features that will benefit your organization and to understand changes that might impact your users. September 21, 2021 The following video (3:25) provides a summary of some of the new fea...

Review the _HelixPlatform 2021 enhancements for features that will benefit your organization and to understand changes that might impact your users. September 21, 2021 The following video (4:46) provides a high-level summary of the key features available ...

Koyo Ramen Soup, Asian Vegetable, Made With Organic Noodles, No

Review the _solutionName enhancements made available during 2021 for features that will benefit your organization and to understand changes that might impact your users. Release notes and notices Known and corrected issues September 21, 2021 View AIOps si...